Today I am going to share some family photographs taken at different houses.  The locations and the dates are not given but from the ages of Lionel and May they are likely to have been taken between 1907 and 1909.  This would make Lionel between 8 and 10 years, May between 6 and 8 years.

The first photograph was a favourite, as it appears in several albums. This doesn’t look any of the places we know Grandad Beck lived. Both the Dorchester and Upwey houses are mid-terrace and prior to Upwey, they lived in the police station at Lyme Regis.

The gentleman mowing the grass is Grandad Beck's father Eli, while his son Lionel is watering some plants. On the left is his mother Franny, wife Rebecca and daughter May.  Rebecca is wearing a smock, which suggests she has been working.

The photograph has amazing quality and allows us to see into the windows of the house.  This reminds me of my Step-Grandparents house, Grandad Crabb was also a gardener. 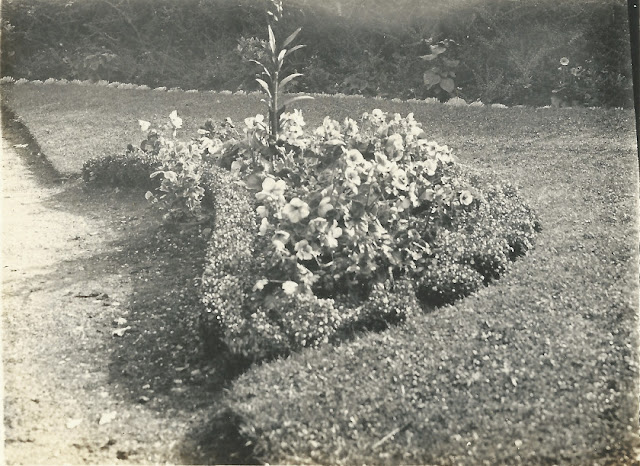 There is an unknown gentleman with Lionel in the photograph below.

In October 1907 two cottages in Buckland Newton were sold by auction.  Eli lived in one of two cottages and next door was Alfred Spurdle.   The advertisement for the auction gives us some more information, besides the occupiers.  The two cottages stood in about two acres of land which included gardens, orchard and paddock in the centre of the village.  The cottages had slate roofs and contained a sitting-room, kitchen, scullery with furnace, pantry, store and three bedrooms.  They each had an earth closet.  It goes on the say that each cottage had a large productive garden and could be converted into one house.  It is likely that Eli and Fanny moved after the sale, especially as Eli worked as a gardener, for the Rev. Canon Ravenhill who was retiring. Rev. Ravenhill was also selling furniture, carriages and horses from the Vicarage.  In 1911 census Eli and Fanny are caretakers at Rempstone Hall, Near Corfe Castle.

Could this be the back door of the first above? The roof is slate but the window is a different design.

The photograph below includes both families plus two ladies. One is possibly Grandad Beck’s sister, Beatrice and the other is too obscured by the plants to identify her.


I hope you have enjoyed these photographs, while we may not know where these were taken, we can be sure the Beck family were keen gardeners.  I have previously written more about Eli and Fanny.

Will it snow this winter?