The Wayman’s of Corfe Mullen

A while ago I asked Who are these people? about a photograph including some of my Grandmother’s family.  Sorting through the photograph albums I have found more photographs taken at the same time.  Some of these are in front of a house, looking at one of them in detail I can make a good guess as to the question of where the photograph was taken and, therefore, who the people are.

Where was the photograph taken?

The answer to this question is possible because the owner of the house has very kindly put his name on the house wall. Thank you to Jim (cousin-in-law) for spotting this.

Thank you Mr Wayman for advertising for your building business on your house.  The sign says E. W. Wayman & Sons Builders.  Little did Ernest know when he put this sign up that 90 years later it would be so helpful. The Wayman family  lived at Tower House, Pine Road, Corfe Mullen (From Ernest and his wife Minnie's entries at burials in Corfe Mullen Parish Council Cemetery).  Now we know the most likely place for this photograph, from Google maps the house is still recognisable at this address.  In my previous post I hadn't considered Corfe Mullen as being a location. Knowing where the photograph was taken has given me some clues to the identify of these people.

When was the photograph taken?

As these photographs includes Rebecca Beck who died in 1928, this photograph must have been taken before that.  May and Fred House married in 1925.  We don't know how long they were courting before the wedding.  In the previous post I estimated a date of between 1923-25 from the fashions. I think this is still the best guess for the date.

There is no clues as to the reason for the photograph, it could have just been a visit, perhaps to pick up Jo or take her home after a visit to Beaminster where the Beck family lived at this time.  The photographs look as though they were taken on the same day at two separate times, due to the location and May Beck has taken off her coat in the last photograph. Perhaps someone had a new camera they wanted to try out.

The Wayman family are important to Grandad Beck's story because his second wife, Jo (Annie) was one of Ernest's daughters, I wrote about their marriage last week.  These photographs included Grandad Beck's first wife, Rebecca.  What I hadn't realised that it looks like it wasn't just Jo and May (Grandad Beck's second wife and daughter) who where friends but the two families. In the top photograph Rebecca has her arm around one of the youngest Wayman girls suggesting that there is an element of affection between them.  The photographs also include Eli, Grandad Beck's father, the bearded gentleman who lived in Poole.

Front row seated Minnie Wayman (58); Rebecca Beck (64). The two girls: Jessie (18) and Bertha (16) Wayman sitting on the grass. The women in the flowery hat is likely to be Emma Wayman (84) Ernest Wayman mother.

I hope you have enjoyed these photographs and please let me know if you disagree with any of my "guesses" or have some of your own to offer. I would love to hear from any of the Wayman descendants.

All original content by Sylvia Collins is copyright protected.

References
1881, 1901 and 1911 census viewed on Ancestry.co.uk plus other records
Register of Burials in Corfe Mullen Parish Council Cemetery 1917 - 2000 http://www.opcdorset.org/CorfeMullenFiles/CorfeMullenBurs1917-2000.htm

The sentenced is prison with hard labour! 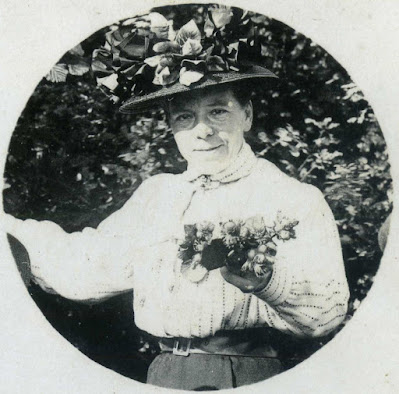